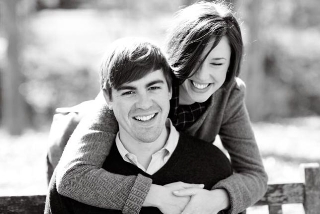 Jess and Reid met at work in the summer of 2006 – she was the intern and he did the company videos.  They got along great, went to lunch, shared many laughs and became friends.  Fast forward two years later… they were both single and he asked her to a tacky Christmas party. One sequin snowman sweater later they were dating. And as they say, the rest was history! Reid proposed to Jess on July 3rd in Sedona, AZ, the first stop on a 10-day trip out west – it was a trip of a lifetime!  They will make it official in October 2010.